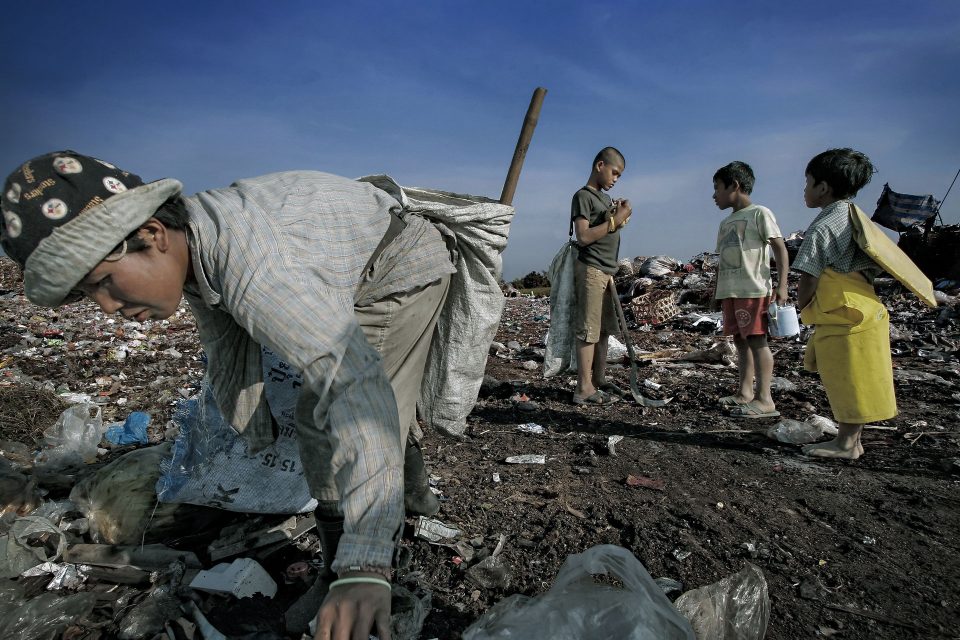 “As the twentieth century vanes, as the “finished world” begins (“le temps du monde fini commence “) mankind is faced by a challenge so formidable that it could threaten its future in a way and to an extent as never before in the past.

In fact, between a minority of the world population that lives in relatively privileged conditions, and the vast majority that lives in total destitution, the gap is widening instead of narrowing, in spite of the frantic technological development occurring in the privileged part. A world population as big as there ever was in history (the number of people alive today in the world is greater than the number of the people who lived in the previous hundred thousand years of mankind put together) has seen in recent years a widening of the gap between the “haves” and the “have nots”; an increase in the tension between these two very unequal parts of the world population is inevitable, and it is very difficult to predict what the outcome of a possible burst of violence sparked by this tension would be, particularly in a situation where the means of global destruction can become available with relative ease. Thus, the problem of the misery and poverty of what is usually called the south of the planet is not only (although, of course, primarily) an urgent moral issue for all mankind, but it must also become a major concern of the relatively rich countries even if considering only their own enlightened self-interest.

Hunger comes foremost to the mind as possibly the greatest adversity pervading large fractions of the population, particularly in Africa, South East Asia, and certain areas of Latin America. Very often crops suffer from a great variety of stresses, either due to climatic conditions (typically drought) or to qualities of the earth in which they grow (often with a high salt content) as well as the stress due to pests such as insects, fungi and viruses. furthermore, and also very often, where a population depends for nutrition on a single crop and a limited one at that, the intake of nutrients (particularly nutrients poor in proteins fit for human nutrition) can be, in the long term, damaging to the health of those populations.

In the context of health, and referring to the diseases which are more specific to the tropical world, one observes likewise a great dearth of research addressed to them, in view of the limitation of the health market of those countries, in financial terms: thus, diseases like malaria and hepatitis A (not to mention schistosomiasis and trypanosomiasis) can be considered orphan diseases, in the sense that the investment addressed to them by the research labs of the pharmaceutical and diagnostic and vaccine producing companies is quite limited, compared to the severity and spread of those diseases.

As a man of science, and particularly as one active in the biomedical sciences, I cannot fail to think that science, and particularly biology, can offer very powerful means, even if not the only means, for solving many of the problems that plague such a large portion of mankind. Through science novel methods can be utilized by the citizens of the countries which suffer most to allevia­te and possibly abolish the worst hardships which are due to the present, difficult conditions.

In fact, it appears evident that through scientific progress, one can begin a catalytic action on the improvement of the life conditions for the Third World, and catalysts are relatively cheap: in other words, investing in scientific co-operation, which means investing in the training of scientists and technicians in the most advanced fields who can apply their knowledge to the problems most typical of their countries, is in fact an investment with incredible possibilities of returns.

This requires, in the first place, that industrialized countries abandon the selfish and short-sighted attitude which has been growing in the last decade to adopt instead international co-operation, including scientific international co-operation. In this context the United Nations System, in spite of difficulties and faults, offers the only available, and the essential, forum and instrument through which this co-operation can be operated. The present negative attitude of the rich world is extremely improvident, and, if it does not change, will witness an increase in the suffering of the less developed world, and an increase in the tension within that world that will necessarily translate into a tension towards the countries that “have”.

This short-sightedness may be deadly for mankind, including the presently rich portion of it. An investment in removing pain in the suffering world, an investment that, if addressed to scientific development, can bring returns well and truly beyond proportion to the modesty of the initial requirements, is not only a moral duty of the well-off, but also an investment in their own wellbeing, particularly that of future generations.

Such investment would not be in “second rate science” as one might think, maintaining the same superior mentality which has brought to the present dangerous situation; the science necessary for the development outlined above is science of the highest quality. Only through high sophistication can one arrive at methods and processes that are simple enough to be of widespread, easy and safe use. Investment in science is certainly not the only element that can solve the socio-economic problems of mankind, but an element that can, for its catalytic effect, have positive consequences of the highest importance. It is in fact an investment for peace, and it is the moral duty of all the people working in the scientific world, but more generally of all mankind, to assure that peace becomes the rule in future generations: with today’s technological development, the opposite of peace is not simply war, but the destruction of mankind.”

Duty#5 is reinforced by: